The entrance to the Dancing School on Saturdays is at the far right of this photograph, in the early 18th Century section, along the footpath which runs between the house and the lawn.

The building is not open to the general public on a Saturday, therefore the main doors are not in use.  Only dance school members are permitted to enter the building, except occasionally when another private group uses the building.

The Dancing School has a medium and a small dance studio in the Annex, and has use of the Hall on Saturdays and Tuesdays, as well as other rooms in the building.

The Jill Gregory School of Dancing is an Affilliated Member of Sherwood Community Association CIO and as part of this contract, Jill is a member of the Trustees’ Committee and we take part in, or help at some Centre events. 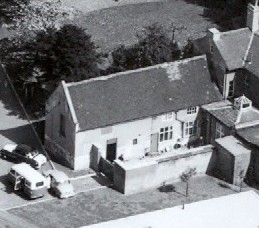 The cottage (left) may be earlier than 1750, as it is older than the adjacent section which is likely to have been built in the 1750’s.  There was certainly a building on this site in 1774 and these parts of the building were on the Inclosure Map of 1792  The small dance studio (below left) is in the former stable (seen to the left of the cottage) and the medium studio (below) has taken the place of the yard.

In the early 19th century the house was extended and some floor levels were adjusted.  In 1833 it was advertised for auction as a “Mansion House with stables, carriage house, vinery, walled garden, plantation (and other areas of land) and said to be of modern construction, fitted up in the best manner……...forming altogether most desirable residence for a genteel family”.  The land belonging to the family who lived here in 1851 extended as far as the Day Brook (beyond the ring road), to the central reservation of Edwards Lane, the Prison and included land on the other side of Woodthorpe Drive.

This is how it looked in 1977 when the Dancing School moved in.

Woodthorpe House has an interesting history.  Whilst research is still being done into the earlier period, we know that various eminent people lived in the house, including several wealthy factory owners, one of whom was also a French Consul , then later, the Chief Constable of Nottinghamshire.  The property and land was sold to Sir Charles Seeley in 1896, and with the exception of the house and the land which currently surrounds the building, the remaining land remained in his family’s possession until his sons sold it to Nottingham Corporation for the building of what was one of the first Council estates in Nottingham.

In 1940, the house was requisitioned by the War Office and was Regimental Headquarters for the 172 (M) HAA  Regiment, then the 161 (M) HAA Regiment.  ATS (Women’s Auxiliary Territorial Service) worked in the offices which were on the ground floor of the house, the officers slept in the house, and the soldiers slept in Nissen huts  in the grounds.  The huts were still in use as part of the Community Centre during the 1950’s.  Had it not been for the War, Woodthorpe House would have been demolished to provide building land for houses.

The Army left the house in a neglected state in 1944, and the Council purchased it in 1946.  For a while it was used as an annex for Haywood Girls’ School, before being passed to Sherwood Community Association in 1949.  Since it’s official opening in 1950,  Sherwood Community Centre has provided a wide range of activities for the local community and is possibly the busiest Community Centre in Nottingham.  The Hall was built in 1979, to help cater for the Centre’s growing needs.  The Coffee Bar and Foyer were added in 1984.

Visit the Sherwood Community Centre website to see what other activities take place here.  Or if you found this history of Woodthorpe House interesting, take a look at the exhibition in Christine’s Community Cafe which is open on weekdays and come on a guided tour and see the deep cellars and other parts of the building.

We are based at Sherwood Community Centre

Woodthorpe House the oldest building in Sherwood, with parts built before 1750.  It has an interesting History

Woodthorpe House still has some attractive architectural features, such as the neo-classical portico with dentilated cross-beams and also some beautiful plaster work.  The Association are hoping to redecorate and protect these features.  Guided tours of the building are possible at some Community Centre events and at other times.

There is an exhibition on the History of Woodthorpe House in the Café.  Click here if you are interested in joining a Guided Tour.